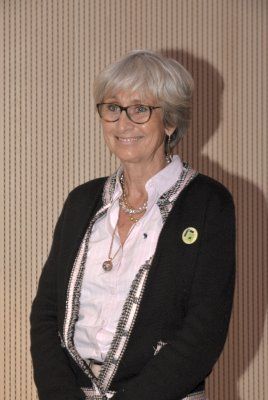 Professor Dominique Bron, Head of Haemato-Oncology at the Jules Bordet Institute, was awarded the Jean Teghem Prize on 25 September 2019. This prize is awarded every three years by the CEPULB in recognition of "a person who has distinguished themselves for their remarkable work in the general interest in the field of scientific popularization or continuing education»(1).

A career dedicated to others
Since the start of her career, Professor Bron has shown particular interest in the transmission of knowledge and the humanization of hospitals. This prize follows the Socrates Prize which she was awarded in 2014 for "the quality of her teaching, her creativity and commitment in the field of didactics, her ability to draw on the results of her research in her teaching and her readiness to listen to students.2

Genuine spokesperson of the FNRS-Télévie
Present since its launch in 1989, Professor Dominique Bron is one of the pioneers of the Télévie adventure. As an active and committed member, she participates regularly in press conferences and seminars that address the general public in order to explain research and the resultant progress in the field of cancer treatment and leukaemia in particular.

The transmission of knowledge to the general public
In addition to her work at the Jules Bordet Institute, Professor Dominque Bron has participated in many conferences aimed at the general public. Her fields of activity in communication are essentially centred around progress in oncology-haematology but also touch on issues of bioethics concerning the use of stem cells and euthanasia.

In 2013, 2014 and 2015 she participated in three series of conferences, at the CEPULB, the Université Inter-Âges that is open to all and also at the MiniMed school that is open to adults seeking to improve their knowledge in the field of health.

Launched some 30 years ago these projects still have a rich and fruitful future before them. It is this longevity in particular that distinguished the work of Professor Dominique Bron from that of the 50 other candidates, drawn from many and diverse fields.