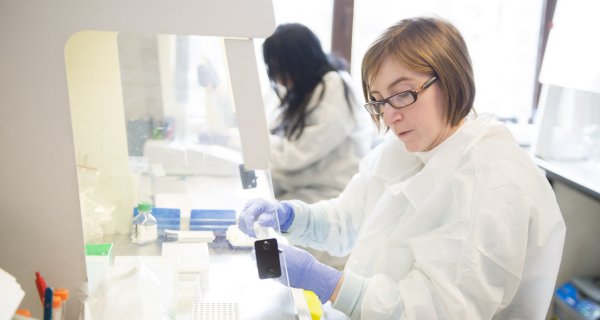 The Laboratory of Oncology and Experimental Surgery (LOCE) is a laboratory at the Institut Bordet recognised by the ULB Faculty of Medicine. It specialises in research into malignant melanoma and pigment cells in general. It combines fundamental research with preclinical and translational research. The LOCE has a self-contained cell culture unit which has established more than 150 primary lines and cultures of normal and tumour cells (mainly melanomas) and adheres to a rigorous quality control programme. The LOCE shares its cell cultures with some 80 research teams around the world.

The LOCE team researches and proposes new strategies in the targeted treatment of melanomas. For example, the combination of MAP kinase pathway inhibitors with a p53 protein activator – a “genome guardian” whose function is impaired in the great majority of melanomas. The aim is to overcome or better prevent resistance to current targeted drugs.

For melanomas presenting BRAF gene mutations (50% of patients), preclinical research has resulted in the development of an original clinical trial, currently being finalised at the Institut Bordet.

Other therapeutic combinations are also offered for mutated NRAS tumours as well as for those showing none of these mutations, which in fact covers all skin melanomas.

Melanoma is reputed to be resistant to radiotherapy. Research is therefore under way to examine the radiosensitising effects of new targeted drugs with a view to making these tumours far more sensitive to radiotherapy.

The LOCE is also working on new prognostic markers for melanoma, evaluated in metastases. For example, the level of expression of a protein called TYRP1, associated with the principal function of normal pigment cells (and preserved in the tumour cell), has a direct relation to a poorer prognosis in terms of patient survival.

Understanding Molecular Mechanisms of Phenotype Switching and Crosstalk with TME to Reveal New Vulnerabilities of Melanoma.

The Road to Dissemination: The Concept of Oligometastases and the Barriers for Widespread Disease.

Neutrophil-to-lymphocyte ratio as a prognostic marker for head and neck cancer with lung metastasis: a retrospective study.

Survival and treatment outcome of head and neck cancer patients with pulmonary oligometastases.